skip to main | skip to sidebar

Philippines Title: Tayong Dalawa
English Title: The Two Of Us
Directed by: Ruel Bayani and Trina Dayrit
Country of origin: Philippines
Language(s): English, Filipino
No. of episodes: (2009 -05-22)[update]88 (as of May 22, 2009)
Broadcast: ABS-CBN Philippines

David "JR" Garcia, Jr. was born into a poor family. His father, David Garcia Sr., deserted his mother before he was born because his wife, Ingrid Garcia was pregnant with David "Dave" Garcia, Jr. When Audrey King and her family went to Tagaytay for a visit, she fell from a set of high stairs. If David "JR" Garcia Jr. was not there she probably would have died. When he gets help, she asks for his name. He tells her that he is David Garcia, Jr. When she gets to the hospital and is asked by the witnesses and her family who saved her, she says it's David Garcia, Jr. but David "Dave" Garcia, Jr. is the one who is credited. She did not realize that he is a different boy. As she grows up falling in love with Dave, Dave meets his brother and soon best friend, JR. Their families did not approve of the friendship. Dave's family thought that JR just wanted to use Dave for his money. Dave & JR's mother's would not let the two hang out. But their father allowed the friendship to continue, because there was something about JR that David Sr. liked, but he didn't know what it was. Dave's grandmother, Elizabeth, suspects and so does JR's mother, Marlene, but nothing stops these two from becoming best friends. When everyone found out that Dave & JR are twin siblings, the family rivalry became worse. Elizabeth, Dave's grandmother did everything to make sure that the news about the siblings did not come out. She lied and schemed, for Marlene, JR's mother, to go to jail. Audrey's father then sends her to Cebu to study there, but not before she meets JR. He feels like he has seen her before, but does not realize who she is. When Dave and JR were sent to the Philippine Military Academy, they started to get competitive with each other, in academics, and for their true love. When they finally got into battle, will brotherhood save them both, or will envy leave them both to die? Audrey has grown up in love with the wrong person, but when she realizes who her true savior is, will she be able to return her love?
Cast: 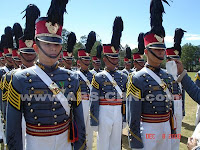 Source:http://en.wikipedia.org/wiki/Tayong_Dalawa
Posted by Philippine's Drama at 2:01 AM No comments: 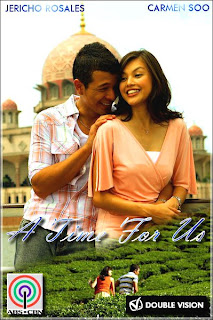 Rocky Santillan's (Jericho Rosales) father was a policeman who was murdered. His mother suffered from a fatal heart attack as she mourned her husband’s lifeless body on the beach. Margaret/Garie (Carmen Soo) was very happy to see her father, Ronaldo Dimaandal (Albert Martinez), again and was excited to spend time with both her mom & dad, but she awoke the next morning to find out he had gone again. Garie and her mom then went to live with a relative who didn’t too think much of her dad (Garie's Grandmother & Eunice's mother).

After 15 years, Rocky has become a PDEA officer and has gone to Malaysia for an important assignment. While in Malaysia, he secretly leads an investigation into his father’s death, which remains unsolved though Rocky can still remember the face of the man who visited his dad before he was murdered (Garie’s dad). Meanwhile, Garie still yearns for her father. She still believes that her father left against his will and plans to go to the Philippines to look for him.

One busy day, when both of them are in a rush, they collide and fall into each other’s arms.

Posted by Philippine's Drama at 1:02 AM No comments: